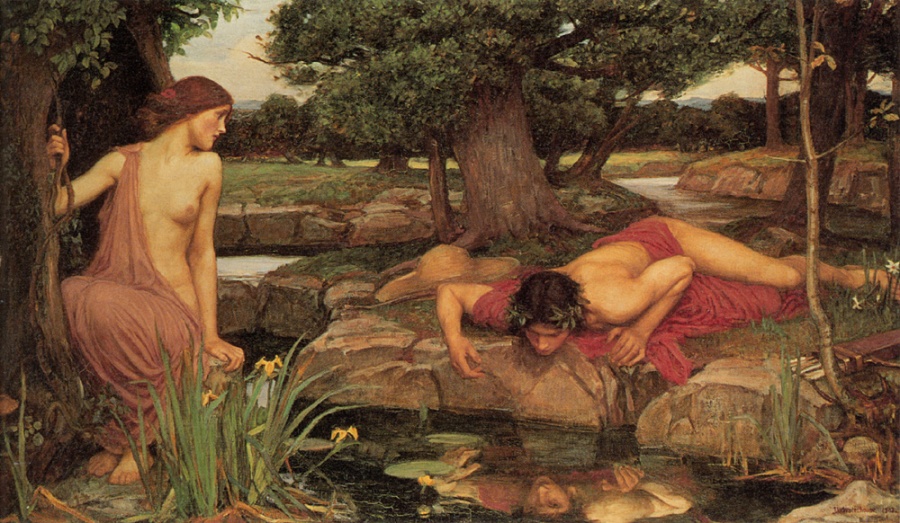 The man whose heart is far from God expends an extraordinary amount of energy elevating the god of Self – boasting about how smart he is, how wealthy he is, how powerful he is. He exalts himself over everyone and everything. He knows more about any subject than anyone else. In his own eyes, no one is greater in all the earth. He never admits failure, never confesses a wrong, never acknowledges weakness or self-doubt. When he is not elevating the god of Self, he busies himself tearing down his enemies – anyone who makes the god of Self look bad. His greatest enemy is the truth and he fights the truth with a vengeance.

Imagine Narcissis gazing adoringly at Self in the mirror. Self-aggrandizement. Self-adulation. Self-importance. Self-indulgence. For the man whose heart is far from God, it is all about Self.

The man whose god is Self is a master manipulator, a master of deception, a conman. He belongs to his Father, the devil, the father of lies. He carries out his father’s desires. There is no truth in him. When he lies, he speaks his native language.

No man is perfect. We all sin. We all fall short of the glory of God. None of us knows everything. We all fail. We all stumble. But the man whose god is the god of Self will never admit this. He will never repent. He lives in a world of make believe, a world of fantasy and unreality. When he looks in the mirror he sees a distorted version of himself.

His most consequential lie is a powerful self-delusion. The fool says in his heart, “There is no God.” He tells himself, if there is a god, I can deceive him just as I deceive people.

The man who worships the god of Self surrounds himself with oleaginous sycophants, toadies, boot lickers. They see his nakedness but pretend that the emperor wears the finest clothes. Convinced that the ends justify the means, they flatter and praise him to stay in his good graces and to trade on his influence.

The man who is his own god believes he is above the law. Many men have tried and failed to hold him to account. The truth is, every man will have to account to God for every wicked act, every careless word. Imagine the day when the man who has spent his life worshiping Self finally faces his Maker. He will not get away with lying to the Father of truth. He will not impress the omnipotent, omniscient God with his wealth, power or intelligence. He will not escape God’s judgment by deflecting and blaming others.

The man whose heart is far from God is not a figment of my imagination. He is real. He is an old man but there is a childlike quality about him. There is something sad and pathetic about his constant need for adulation. He is rich in material wealth but morally bankrupt. He is seemingly successful and yet a colossal failure. He is a powerful liar but he cannot change the truth. He presents himself as a savior but he cannot save his own soul.

I had a dream about this man a couple of months ago. I said one word to him. Repent. The man whose heart is far from God is not beyond God’s redemption. I pray that he will be humbled before the one true God before it is too late.